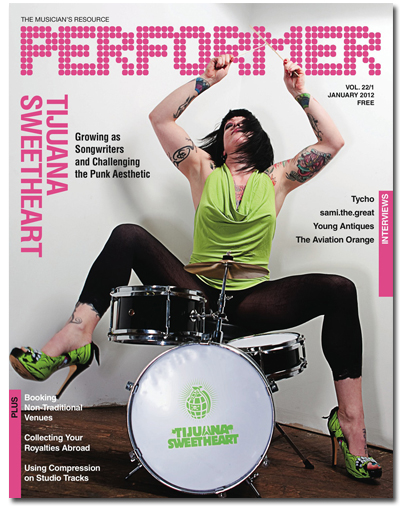 I can’t think of a better way to welcome you back into my weird world than offering up this free download of Performer Magazine‘s December Issue featuring Kae Sun, Fishbone [FISHBONE, YALL] and a couple album reviews by yours truly. 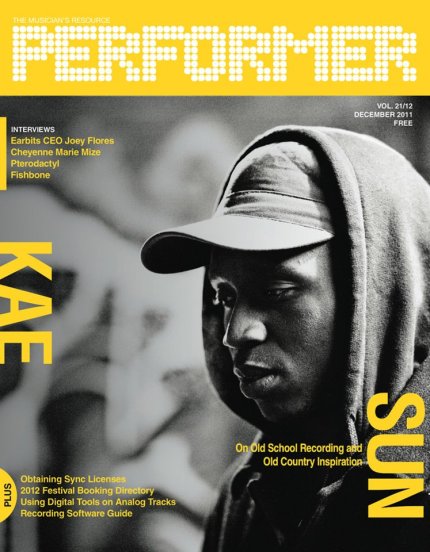 I must admit that I don’t quite get the story, but they’re jamming in the black and white. This is an energetic, R&B art freakout complete with ‘fro pomps, horns, bowties and handclaps. Enjoy.

One Life Stand is Hot Chip’s fourth record release, a whole two years from 2008’s Made in the Dark. To be honest, his last release completely escaped me. I was, however, a very big fan of 2006’s The Warning which was full of hits I still listen to from time-to-time like “Over and Over” and “And I Was A Boy From School.”

Hot Chip is known for their not-too-fast, minimal electro-pop goodness without being too boring. You could play them at a dance party and people could jam without spilling their drinks. Not to mention the occasional falsetto vocals.  The 10-track offering starts off with “Theives In the Night”, beaming in sonic rays of shimmer before dropping in some sparse percussion and echoing keyboard blips. The song fills out in pieces: first the vocals, a  techno riff then the open-air handclaps. Add in some slick synths, light snares and you’ve almost got yourself a disco hit.

Ten years into their career, Hot Chip still knows how to have fun with their sound and create a deliberate listening experience.  For example, “Hand Me Down Your Love”   is very employs a heavily played piano [you can hear the little hammers striking the keys with brute force], a snare and  hyper-compressed background vocals. At first the song sounds very contained and boxed-in but by the chorus it opens into a fuller, more breathable sound. I know the violins and lighter piano melody play a part, but the attentiveness to detail during production also lends to the layers of listening.

Standout tracks are “I Feel Better”, a pulsating song with falsetto vocals, countering melodies that float in and out of each other over a glitzy synth hook. “We Have Love” has the most upbeat tempo with an emphasis on percussion and keyboard blips layered under the density.

This album does have its slow moments [“Brothers” and “Slush”], but they’re easy to skip and continue on to a jam. If you like handclaps, synthesized instruments or just wish Boys Noize was a few notches less intense, you’ll enjoy this album.

L.A.-based produced Flying Lotus has been gaining lots of exposure after releasing Los Angeles. I found out about him a few years ago after an intense Journey To Satchidananda phase [read 2007’s “Flying Lotus Is (From) the Future“]. After some research on Alice Coltrane, I found out she had a little-known nephew producing music in Southern California. He’s the great-nephew of legends John and Alice Coltrane. Yes, those Coltranes.

He makes great music. His EP Reset was followed by a full-length album, Los Angeles, which was an impressive showcase of his capabilities. Next up is his album Cosmogramma which is set to be released on May 4th on Warp Records.

Word on the street is there will be collaborations with Radiohead’s Thom Yorke, Ravi Coltrane and others. Stay tuned for more information.

Here are two singles from Erykah Badu’s upcoming album Amerykah Part II: Return of the Ankh which is set to be released in late March.

“Jump In the Air [and Stay There]“

Root 70 Lounge is a Japanese Hip-Hip, Nu-Jazz and Lounge label that I stumbled up by luck. I caught an eyeful of that vivid e-flier and the search was on. Within a few minutes I found that they have a new release on the horizon set to drop on February 10th in Japan by a French producer by the name of J-Zen.

J-Zen isn’t making music I haven’t heard before but he falls so gracefully into the canon along with other soulful sampling greats like Madlib and Dilla but he fits into the new school wonderboy category with my favorites Flying Lotus and Nosaj Thing who compose original beats with thoughtfulness.

His album “BREAKfast” was released on French label Dooinitmusic last year. It’s a mid-paced affair with lots of snares and wavering melodies that play through seamlessly. Each track ending tacks onto the beginning of the next, making it an album that begs to be listened to in it’s entirety because it’s obvious it was made in that way.

The first track,  “Wake Up Call”, begins quite appropriately with a blaring alarm clock followed by a lazy, wavering chime melody reminiscent of a baby-mobile. It’s a sort of  lullabye to wake up to. The album listens like a mediation. There’s a method to his madness that makes “BREAKfast” sound like a 4 a.m. creation, a breakfast right at dawn not around 1:30 when you roll out of bed just in time for Divorce Court.

My favorite track on the album is “Moka.” It has that crackling vinyl sound, that fuzzed-out crisp  kind of percussion  and a really warm, thick melody. It sounds like all it’s missing is Q-Tip. “Muffin” is also sweet with a slightly off-tempo melody tinkering throughout the track.

I highly recommend this album for people that go on bike rides, long public transportation commutes or staring off into space while listening to something your brain doesn’t have to dissect to appreciate it’s tiny details.

I’ve been finding a lot of fun tracks lately. Check out some new bands you might get into:

The Drums are a Brooklyn indie band and this track is a sugary-sweet almost twee-pop ditty that’s really made for summer. Put this one on ice and pull it out once the sun sets up camp for a few months.

Portland-based duo Chip Chop is releasing their 5-track EP Lanch Blank tomorrow on February 2nd on Run Riot Records. This song is groovy electronic song with echoes and a mid-level melody circling itself.

Vitalic is a French-Italian dude that makes some pretty glitzy disco-pop. “Sea The Sea [Red]” is from his 2009 release Flashmob. You can read the Pitchfork interview and watch the video for his single “Your Disco Song.” You should also listen to “One Above One.”

M.I.A. quietly slid this video for “There’s Space For Ol Dat I See” onto Youtube on January 12th and called it a day. Just by word of mouth, more than 75,000 people have gone to watch the weird, alien-green LED freakout.

M.I.A.’s sounds like she’s singing through a tin-can telephone to a song she can hear coming from the side you’re on.

Plus, don’t forget to head over to the Etta Strange Blog Youtube Channel to check out some other cool videos like Birdy Nam Nam’s super technicolor psychedelic video for “The Parachute Ending” , Maluca’s sassy video for “El Tigeroso” and the mind-bending visual composition for Ligeti’s “Artikulation.”

So, check it out. Ettastrange.com is on the way but these things take some time, so be patient. I just can’t watch the world spin without putting some ink down about it, so I’ll be sticking around here until the great migration. Won’t you be my neighbor?

Today marks the beginning of the RPM Challenge – that’s Record Production Month. Here’s a full description from the site:

This is The Challenge – Record an album in 28 days, just because you can. That’s 10 songs or 35 minutes of original material recorded during the month of February. Go ahead… put it to tape.

It’s a little like National Novel Writing Month, (NaNoWriMo.org) where writers challenge each other to write 1,700 words a day for 30 days, or the great folks over at February Album Writing Month (fawm.org), who encourage artists to write 14 new songs in February. Maybe they don’t have “Grapes of Wrath” or “Abbey Road” at the end of the month, or maybe they do—but that’s not the point. The point is they get busy and stop waiting around for the muse to appear. Get the gears moving. Do something. You can’t write 1,700 words a day and not get better.

Don’t wait for inspiration – taking action puts you in a position to get inspired. You’ll stumble across ideas you would have never come up with otherwise, and maybe only because you were trying to meet a day’s quota of (song)writing. Show up and get something done, and invest in yourself and each other.

Anyone can come up with an excuse to say “no,” so don’t. Many of you are thinking “But, I can’t do that! I don’t have any songs/recording gear/money/blah blah blah…” But this doesn’t have to be the album, it’s just an album. Remember, this is an artistic exercise. Just do your best using what you have in order to get it done. If you have a four-track, become a four-track badass! A mini disc, a pro-tools rig, a Walkman, an 80’s tape recorder – use it. Do your best. Use the limitations of time and gear as an opportunity to explore things you might not try otherwise. If you can afford studio time in a “real” studio, fine, but let’s be completely free of any lingering idea that “good” records can only be made in a studio. If that were so, then all the old scratchy blues records or Alan Lomax field recordings that have changed our culture – the world’s culture – wouldn’t still resonate with us today as they do. Springsteen’s haunting classic “Nebraska” was a demo he did at home on a crappy machine. That album is fricking awesome. What label would put those recordings out now? (See: who cares) There are a million examples of this kind of stuff, but the fact will always be: Well written, honest music is compelling and undeniable no matter what it was recorded on. So put it to tape.

February will come and go whether you’ve joined in or not, but do you really want to be left out?

• Ten songs or 35 minutes of recorded material, on a CD, mailed or hand-delivered by noon on March 1 (since March 1 is a Sunday, items mailed on March 1 will receive a March 2 postmark, which is acceptable). Make at least two copies, one to send to RPM HQ here:

…and then the second copy is for your regional listening party, if you plan to attend one. Listening party details will be announced soon!

• Recording can only be done in the month of February – no prerecorded songs.

• All material must be previously unreleased, and we encourage you to write the material during February too.

• Participating bands get their own page on the site, which you can blog to as much as you want. You also get access to the band-only discussion board, where you can swap ideas, resources, etc., and the ability to e-mail and private message with the other participants.

• All the completed albums may be put up in the jukebox on the website so people can check it out; conversely, if you’d rather not share your work with the public, then no one needs to hear it but us.

Write some instrumentals, split up the songwriting duties amongst band members, form an RPM side project, write songs on the piano or clarinet instead of your primary instrument, make that metal album you’ve always wanted to – buy a ukulele! Just do your best to make the best album you can. Be unafraid.

What if every musician you knew put their music first for 28 days?

What if you recorded the best song of your life?

What if the world was never the same?

What’s stopping us? Nothing. February is Record Production Month. You have no reason to say no, and nothing to lose.